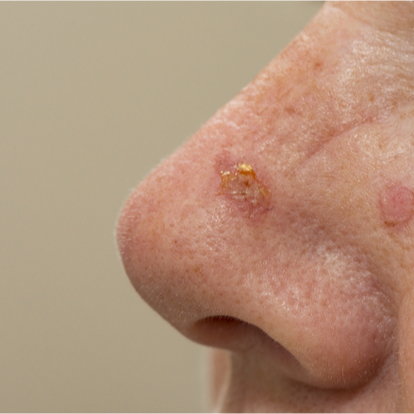 Also known as solar keratosis, actinic keratosis affects more than 10 million Americans. These precancerous growths on the skin are caused by overexposure to the sun over a long period of time. They are characterized by rough dry lesions or patches that appear on sun-exposed areas of the skin, such as the face, back of hands, arms, scalp, or shoulders. The lesions may be red, pink, gray or skin-colored. Lesions often begin as flat, scaly areas and develop into rough-textured surfaces. Sometimes it is easier to feel a growth than it is to see it.

Actinic keratosis is more common among fair-skinned people and those who have had years of outdoor or tanning bed exposure to ultraviolet light. Actinic keratosis can develop into malignant cells, typically squamous cell carcinoma, which is a type of skin cancer. That's why treatment is important. After a physical examination and biopsy of the lesion, your dermatologist will opt for one of the following treatments to remove the growth: